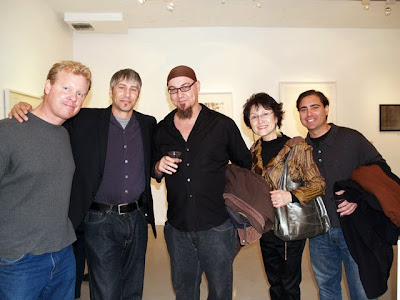 Shizuko Greenblatt and Michael Giancristiano are

for the 2009 Open Show, despite the rainy weather that Saturday!

On December 12, 2009, Los Angeles Art Association (LAAA) presented the 2009 Open Show, LAAA's signature survey exhibition of emerging Southern California artists of all media. The 2009 Open Show is juried by Apsara
DiQuinzio, Assistant Curator, San Francisco Museum of Modern Art. Distinct by design, LAAA's annual Open Show has developed into one of the most potent survey exhibitions on the West Coast. The opening reception was from 6-9pm on December 12, 2009 and runs through January 8, 2010 at LAAA's Gallery 825.

Posted by Ginger Van Hook at 2:49 AM No comments: